We'd like to share this great article with you by Richard Watts and photographer Darren Stone of the Victoria Times Colonist who visited Muse Winery.


For American visitors Robert and Kelly Moore, the small vineyard on the Saanich Peninsula felt a lot like home.
The Moores live in Washington, D.C., but Kelly originally comes from San Francisco, close to California wine regions like Napa and Sonoma. So, vineyard tasting rooms are familiar. Besides, the two make sampling unique, local flavours part of all their vacation experiences.
And in their opinion, the two whites they sampled at Muse Winery in North Saanich — an Ortega called Poetic Justice and a Pinot Gris called Legally Blonde — were worth the stop.
“It’s two for two,” said Robert.
The couple is part of a growing agri-tourism movement, where visitors seek out unique local food and drink to sample. And many, like Kelly with her California background, come with experienced palates; the wine has to pass some serious muster.
Muse proprietors Peter and Jane Ellman are not only prepared to discuss wines, they will also talk about local restaurants, locally caught fish and locally grown meat and produce. But that talk always turns to the appropriate wine pairing.
“It always comes back to the wine,” said Peter. “The wine has to be the backbone of the operation.”

There are about 40 wineries on Vancouver Island, with several reportedly in the process of being sold. They are part of a local industry reliably producing wines known for their clean, crisp taste and light body.
But wine-making on Vancouver Island is still a relatively recent endeavour, according to the B.C. Wine Institute, originally started in 1990 by the provincial government and a voluntary trade association since 2006.
According to the institute, one Vancouver Island farmer made wine from loganberries in the 1920s. Another attempted to create a vineyard near Duncan 50 years later, but serious modern efforts didn’t begin until the 1980s.
That was when the provincial government financed an agricultural trial to assess which grape varieties would grow well on the Island. In the trial, nicknamed “the Duncan Project,” agriculturists grew, monitored and tested more than 100 varieties of grapes between 1983 and 1990.
Pinot Gris and Ortega were identified as promising and both continue to be widely grown. But vintners are also now growing reds such as Pinot Noir and Marechal Foch.
John Schreiner, broadcaster, journalist and author of several books on wine, including the Wineries of British Columbia and the B.C. Coastal Wine Tour Guide, said Vancouver Island wines come with a distinct flavour.
Schreiner said Island wines tend to be quite acidic. Whites are lemony, or citrus scented and flavoured. Reds tend to be leaner and thinner when compared to wines from sunnier areas like the Okanagan, where reds are fuller-bodied.
That doesn’t make either set better or worse, he said. It just means they have a different character.
“If you put the Vancouver Island Pinot Gris [white] alongside the Okanagan Pinot Gris, you will be able to tell the difference in the two terroirs instantly,” Schreiner said.
The word “terroir,” from the French word terre, for land, is loosely defined as a sense of place. It refers to the peculiar geography, geology and climate that combine to create subtle nuances in food products such as wine.
“It’s all climate and soil,” said Schreiner, adding the climate on Vancouver Island can be tough for winemakers — possibly the toughest in B.C.
For example, the growing season might not end in October, but the rains certainly arrive. In wet weather, vines suck up water and the juice in the fruit becomes more diluted.
Worse, damp weather encourages mould and grapes become useless.
Vineyards compensate for the climate by doing things like building tents early in the spring to give their vines a warmer headstart before October arrives. They will monitor sugar levels closely, sometimes testing several times a day to see when it might be the right time to pick.
Schreiner said the most successful winemakers on Vancouver Island are the ones who pay close attention to all the details. And the result is a wine taste all its own.
“Because it can be so difficult there, they really have to stretch their winemaking, so you get some really interesting wines,” he said.
Giordano Venturi, co-owner with his wife Marilyn of Venturi Schulze Vineyards in Cobble Hill, recalls a quote from a pioneering Okanagan winemaker who said it takes at least 10 years to really know a vineyard.
“Well, here I would say it takes at least 25,” said Venturi, who opened his vineyard on Christmas Eve 1993, making it the third to take root in the area, after Zanatta and Blue Grouse. Venturi calls those early days “heroic times.”
It was the first time anyone had made a commercial attempt to grow many of the grape varieties identified in the Duncan Project.
Things like wire and posts to string up the vines were not widely available. He and his wife even travelled to the mainland to uproot their first vines from a vineyard and truck them back to the Island.
“It was pretty tough back then,” Venturi said. “Now all you have to do is pick up the phone and you get all the varietals and all the root stock in a few days.”
He has also had to learn through trial and error how to get the most from his vines. He has to intensively trim and manage the vines’ canopy of leaves to get the best use of available sun.
He stays away from pesticides and herbicides, But he won’t call his operation “organic” because he believes the word is overused and meaningless.
At the first hint of rain in October, everything gets picked as quickly as possible, or else the whole crop can be lost.
Cool temperatures, a short sunny season and looming rain make the vineyard business on Vancouver Island a finicky one.
“But it can be an advantage,” Venturi said. “If you can naturally ripen the vines, it will make for incredible flavour.
“With the cool nights, the grapes will keep their acid up and with the sugar in good years, we can make some incredible stuff,” he said.
“But you have to take your risks and maximize what little bit of sunshine you have.”
Like the Ellmans of the Muse Winery, Venturi said a big part of his business has been about educating customers.
While people on Vancouver Island are now drinking more wine than when he started, it can be difficult for a small operation like Venturi’s, with fewer than 18 acres, to compete with big commercial operations in places like Chile or Europe. But local wineries can offer an advantage when it comes to education, he said.
“People can learn to appreciate what’s local and learn to see that what is produced here locally, [and what] will go best with local food.”
rwatts@timescolonist.com
© Copyright 2013
Posted by Muse Winery at 17:26 No comments:

We're involved in 2 great events  on May 23rd, so we wanted to get out a post to everyone to let you know.


Uncorked: The Teenage Years of the BC Wine Industry

Drawing on our extensive British Columbia wine label collection, join Royal BC Museum Curator Dr Hammond
for a sparkling toast to forgotten classics and the popular wines of the 1960s and 1970s. Enjoy sampling over 30 BC wines, delicious BC cheese and a snapshot of the VQA by Beth Crawford, owner of the VQA wine shop at Mattick’s Farm.

Sidney Meet Up invites you to Muse for a Fashion Show and Fundraiser for
Angel Flight of British Columbia.
Angel Flight provides free aerial transport for people requiring travel to Cancer Treatment centres.
Tickets are $30 each and available at cbythesea@shaw.ca
Visit the website for details on participants and sponsors.
Special Guest is Chris Paul (Salish Artist)

So much to do, so little time!  We hope you find time in your evening for one of these wonderful events.

A delectable menu has been fashioned to make this an extraordinary Mother's Day treat at Muse Winery!
Make sure to reserve early so your Mother will be included in this wonderful feast!

At $32/per person including GST, $16 for children, your pocketbook will be happy, your taste buds astonished and your Mom delighted that you found our charming little vineyard ambiance to surprise her with.

While the Bistro staff take care of your taste buds, we have the inspiring, refreshing work of Wendy Picken for your eyes.  Her work created in her own Mango Smile Studios is on exhibition for the month of May in the Bacchus Room. 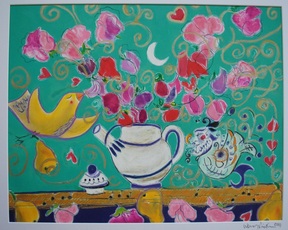 Bistro Muse opens this week - May 9th Thursdays to Sunday 11 am to 4 pm.  We're looking forward to another wonderful season of fine wine, great food, art, theatre and music!  Join us soon.